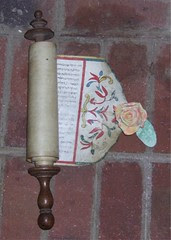 megillah
Originally uploaded by Teckelcar
In case y'all were wondering here is what our megillah looks like. I used Jake's rose to hold it open so you can get a glimpse of the text and the pretty illumination at the beginning of the scroll.

The text is quite faded at the start of the scroll, but as you unwind it the inks brighten up and are no longer faded. There is only one other illustration and it appears at the very end of the scroll. It is similar to the one at the start, which is to be expected.

For those who are interested this site gives a good run down on what a megillah is and how it is made. I love the pictures of the illuminated scrolls on the opening page. My Grandmother would have liked them as well.

In addition to the main scroll is a smaller square of parchment wrapped around the scroll. 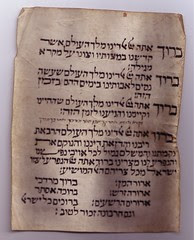 cover
Originally uploaded by Teckelcar
I've included it as well. It's writing has held up better than the start of the main megillah, probably because it has edges you can hold without touching the text. It's small size also means that you needn't run your finger along the text to keep your place. I have a feeling that the scroll has been handled a great deal which caused the fading. Ideally a pointer or yad should be used to prevent fingers from coming in contact with the parchment. The oils on fingers can wreak havoc on the scroll itself.

At some point I need to bring this in to a scholar and try to figure out it's age and probable land of origin. But for now I'll keep it safe. It's interesting how it was rescued, unwittingly, by a gentile (my Grandmother) to only end up back in a Jewish home.
Posted by Sarah at 11:57 PM