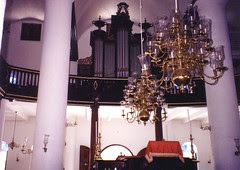 organ
Originally uploaded by Teckelcar
Over at Meryl's Soccer Dad posted about the oldest synagogues in the western hemisphere. Well it turns out that Larry and I visited the oldest, Mikvé Israel-Emanuel, while we were on our honeymoon in Curaçao.We were there in June of 1992 and it was absolutely gorgeous.

After a bit of digging I found a roll from our trip and I'll share a few of the pictures we took of the synagogue and the Jewish Cultural Museum. First up is a picture of the organ and some of the chandeliers inside the sanctuary.

It was beautiful inside the building. My pictures really don't do it justice, the dark mahogany wood, the bright sunlight streaming in and the white paint conspired to confound my film. But I did get a few good shots and if you click through the picture it will lead you to the picture set. I don't remember much, other than the building being very cool and airy inside. 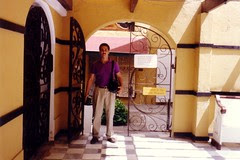 Larry
Originally uploaded by Teckelcar
We then ventured forth through the courtyard connecting the museum to the synagogue. Larry is standing the gateway separating the two. Inside the museum were a few artifacts from the Jewish community of Curaçao.

I remember the museum was quite small and we had to go up a flight of stairs. Inside the first thing that caught your eye was the fully set Seder table safely contained by plexi-glass. Nearby was a display of scrolls and judging by the illumination on the bottom one, I think there was at least one megillah. Which is rather ironic. The two things I photographed are about the holiday we just had (Purim) and the one that we are preparing for (Passover).

At the very end of the picture set is the street entrance to the building. It is a rather plain door set in the wall outside the Synagogue. For whatever reason that is the only external picture I have. For a souvenir we picked up a couple of copies of the sisterhood's cookbook in the museum. I'm going to try out a few recipes and post the results at a later date.
Posted by Sarah at 11:58 PM