Artist of the Week: Snowmen 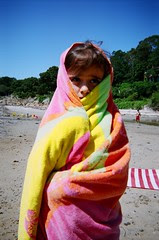 bundled up
Originally uploaded by Teckelcar
This week's artist is Rebecca. The picture of her is from last summer. We had forgotten the camera when we went on vacation and ended up buying a bunch of disposables. I finally got around to developing these cameras last week (it only took me seven months) .

She looks so cute all bundled up in her beach towel and I thought it was fitting for this week since it's warm, but I'm featuring her snowmen.

Just after winter break Rebecca brought home a charming project that demonstrated the concept of first , next and last. She had to draw a series of pictures showing how to build a snowman from start to finish.

It is a fairly ordinary progression from one snowball, to two stacked snowballs and finally the completed snowman.

building1
Originally uploaded by Teckelcar
But... when you turn over the project you get to see the whimsy that is Rebecca.

On her own she decided to draw what happens when a snowman melts.

I love how the snowman starts out so very tall and proper.

melting
Originally uploaded by Teckelcar
Then it starts to shrink. All the details are still there, from the classic top hat, the eyes made of coal and the stick arms. It's just smaller. In the last panel all that is left is just a smudge of snow sitting in a puddle of snow melt, surrounded by two sticks and a scarf.

Another snowman she brought home was an in class project that was to be given as a gift. It's book loosely based on "Brown Bear, Brown Bear, What do You See?"

cover
Originally uploaded by Teckelcar
She had help with the binding and such, but the illustrations are all hers. If you are interesting in getting the whole story, just click on the cover and it will lead you to the photo-set of the whole book. There is even a little surprise at the very end of the book.
Posted by Sarah at 11:58 PM