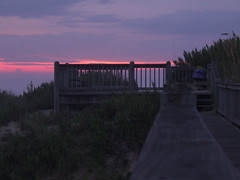 I am waking up at the crack of dawn and I just feel compelled to photograph it as it unfolds. The colors are so vivid and with the wide open horizon I can see the full beauty of the sun rising.

This morning I even woke up Larry and asked him to join me for a walk on the beach with the dogs. It was so quietand serene, I thought it would be a nice way to start the day. Larry agreed and we headed on out.

It was still a bit overcast, but the beach was nearly empty and we had no children trailing after us wanted our attention, all we had was each other and a couple of eager dogs pulling on their leashes. It was nice being able to go out on our own, secure in the knowledge that another set of parents were back out the house. Sharing the house with another family does have a great deal of advantages, especially when the two families mesh as well as we do. 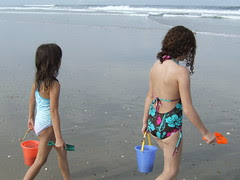 Girls on the beach
Originally uploaded by Teckelcar
Later on, after lunch, I headed back down to the beach with the kids, including one that is not my own.

The youngest child of the other family is bit older than Rebecca, but the two of them have really hit it off. They spent the bulk of their time on the beach as thick as thieves. It is such a pleasure being able to sit back and watch without having to mediate minor disputes every 15 minutes.
Posted by Sarah at 10:06 PM