Artist of the Week: Inventors 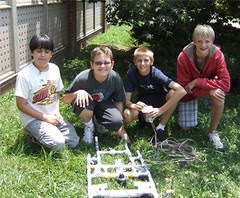 tadpole
Originally uploaded by Teckelcar
This one has been a long time in coming, well over a month after the fact, but without further ado I present this week's artist (or rather artists) the inventors of the TADPOLE: Logan, Jake, Chris and Paul.

This fine group of intelligent young men were assigned the task at the Regional Governor's School for Middle School Youth to develop an underwater vehicle that could be controlled remotely. It needed to be able to go up, down, turn, and land on a target. They had less than two weeks to design and build with a limited amount of supplies. There was one other underwater team and the two teams would face off on the last day. 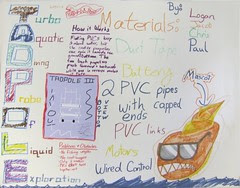 tadpole poster
Originally uploaded by Teckelcar
There were also two other vehicle types being created, solar cars and rockets, but the underwater vehicles were by far the most interesting.

Before the demonstration and competitions on the last day of class, each group had to do a brief presentation about their vehicle. Pictured here is the poster that the boys created. On it details what materials they used and what their design limitations were. They also included a nice schematic and and explanation of exactly what TADPOLE stands for: Turbo Aquatic Diving Probe Of Liquid Exploration (and yes they named it first and then came up with what it meant). It was nice to see that they all contributed to both the presentation and the design.

Jake in fact had a lot of fun designing and refining the vehicle. Their vehicle was the far more elegant of the two and turned out to be the much better design. It easily completed all its assigned tasks in the small above ground pool set up outside the building. The other one immediately fouled in its control wires and was not very maneuverable, it spent a fair amount of time just churning water. I think our team did a bang up job and they were gracious winners to boot.
Posted by Sarah at 11:12 PM