Artist of The Week: Building Blocks

Max
Originally uploaded by Teckelcar
This week's artist is the perpetually bouncy Max. He is a very active boy and as a result is hard to photograph in any sort of natural pose. It's not that he doesn't want to be photographed, he'll happily drop whatever he is doing and mug for the camera. But that's the crux of the problem his picture face is always a very forced closed mouth smile. It doesn't suit him and is not what I want when I take a picture. However, when he is not posing he is in an almost constant state of motion. There are times when he is literally bouncing on and off the furniture.

So yes, he isn't facing the camera and you can not see most of his face, but I love this picture. It is Max being just Max and not "picture Max." 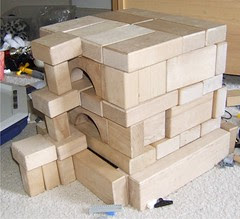 building side
Originally uploaded by Teckelcar
Anyhoodle, this is about one of his many, many buildings.

He, like his brothers, loves to create things with their building blocks. Max is always calling me up to his room to photograph his latest creation. He proudly stands there as I shoot pictures from various angles, showing him the last few frames on the camera's display. Satisfied that his creation has been preserved in pixels he happily plays with his structure and is not at all disturbed when it is invarably destroyed, either by himself or his siblings.

As I recall this building lasted for quite some time. It was a sturdy structure that withstood all sorts of military attacks. If fact Nate even sat on top of it a couple of times. 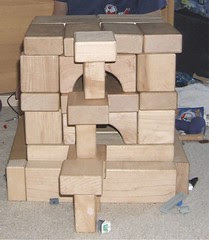 building front
Originally uploaded by Teckelcar
I like how the building is serviced by an elevator located on the front of the building. It is represented by the slim column on the front. The arch blocks are a nice touch and allow you to peek inside.

The buiding blocks, along with the Legos and Brio train tracks have been by far the most successful toys they have received. They are in constant use and it is amazing to see all the things the kids make with them.
Posted by Sarah at 10:46 PM