Artist of the Week: Domino Tower 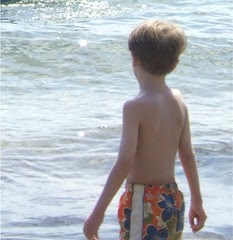 Max
Originally uploaded by Teckelcar
This week it's Max's turn to be artist of the week.

I took this picture of him back in July when we were visiting my cousin. It is from a much larger picture that I cropped down to just Max. His stance has an almost wistful quality as he looks out to sea or he is just contemplating chucking some rocks into the water. Either way I really like the pose, he is relaxed and for once keeping still without my telling him to stop moving.

A rare moment indeed in this household.

And I wouldn't want it any other way.

Domino tower
Originally uploaded by Teckelcar
Anyhoodle, Max a few days ago was playing with the dominoes and created the rather intricate tower pictured on the right. When he completed it he promptly asked me to take a picture. I duly complied with his requst and not 10 seconds later Dell ambled by and knocked over the tower with his tail.

Fortunately Max understands that is one of the hazards in our household. As I stated above, it's an active household and things get knocked on a regular basis.

As for the tower, I think Max really outdid himself. He was able to use most of the dominoes and balance them on on just two vertically standing tiles. You would think it would tip over in an instant, but it required a direct hit from Dell's exuberantly wagging tail. I think that is pretty impressive.
Posted by Sarah at 11:31 PM