My House is Infested 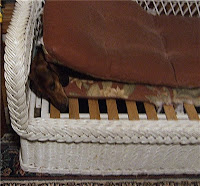 Theoretically the top cushion should be against the back of the dog couch, but John prefers to have it stacked top of the bottom cushion. He usually pulls it back down within an hour of my straightening it up into it's "official" position. So at this point I don't bother unless we have company.

Nate noticed Dell in the dog couch the other day and took this picture. We both found to rather funny that Dell's head was the only thing you could see. Normally he and John will be on top of the cushions, each dog curled up in his respective spot. But not this time, Dell apparently wanted to be inside the cushions.

And stay he did until something far more exciting (at least to Dell) happened in the house or outside.
Posted by Sarah at 11:38 PM