Artist of the Week: Beans and Worms 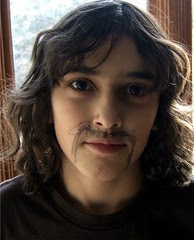 maybe Nate
Originally uploaded by Teckelcar
This week's artist is El Bandito Nate. And yes, he and his friends drew a mustache on Nate's face while riding home on the bus just the other day.

It started off as a sort of truth or dare thing. The original mustache was rather small, but Nate decided it looked stupid and figured bigger was better. So for the rest of the day I felt like I had a short crazed bandit running around the house. Fortunately no permanent markers were available on the bus and it pretty much washed off with just a bit of scrubbing.

I think the best comment about Nate's new look came from Jake, "... you like the first person that fell asleep at a party." As for my reaction, I figured the less said the better. I thought the whole thing was very funny and I was glad it was not done with a sharpie. Nate's science fair project
Originally uploaded by Teckelcar
With all the silliness that is Nate there is also a serious and academically motivated side. Like Jake in 6th grade, Nate had to do a science fair project this year. He chose a project not too dissimilar from Jake's first project. Instead of fertilizer though, Nate chose worms and their effect on plant growth.

Nate's project was a bit more modest in scope than Jake's, however I had to buy worms. 500 red wigglers to be exact. I've never aspired to be a vermiculturist, but then again parenthood is full of surprising turns. The good news once spring is really here I can dump the whole lot into the lawn. So far the little beasties are hanging in there. They did seem to help the plants along and on the whole the project was a success. Hopefully next I won't have to buy any more critters.
Posted by Sarah at 10:28 PM