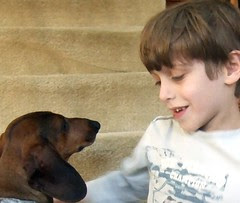 Max and John 2
Originally uploaded by Teckelcar
I submitted this photograph of Max with John for this week's MCP Project 52. The theme this week is "open your heart" and I felt the interaction of Max with the dogs best represented the theme.

In all likely hood if Max had never grown up with dogs he probably wouldn't like them. Dogs are messy and unpredictable and Max is not a big fan of either. Max is still a bit wary of big dogs, but our very silly and loving dogs has opened his heart. He has told me on numerous occasions how he will have a miniature dachshund when he is all grown up and out on his own.

I'm glad our dogs were able to worm their way into his affections and open up the world of companion animals to him. The world can be a lonely place and having a pet can warm up your little corner.

As to the picture itself I tried out adding texture. The effect I used is called dry brush and I like the feel it gives to the finial product. I generally avoid using such filters and effects, but it's good to try something different once in a while.
Posted by Sarah at 10:36 PM