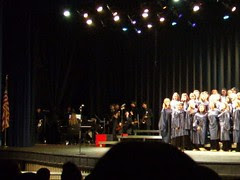 show chorus band
Originally uploaded by Teckelcar
Or, as I like to call them, the unseen heroes of Show Choir. Either way Jake's show choir band is this week's artist.

Tonight was their big season debut, the dreaded pyramid concert. This time around it was a far, far better experience. There was far more information about the event and the fund raising was limited to food sales before the now free concert (I think the music directors got an earful from the concert four years ago). I still feel sorry for all the fifth grades dragooned into performing, but I'm focusing on my son who was there by choice. He volunteered to be part of the band that played off stage for his high school show choirs. You can just see them in the wings. They are all dressed in black so as not to attract attention. Jake is on the far left holding his trumpet. Below is the closing number "How Far We've Come" from the co-ed choir's set.


I think the band did a terrific job. The music was a real stretch for Jake, but he really wanted to play. Which I think is he best way for him to grow as a musician. On the whole it was very enjoyable listening to a live band performing with the choirs, particularly during this swingin' tune.
Posted by Sarah at 11:39 PM