MCP Project 52: The Universe in Her Hands 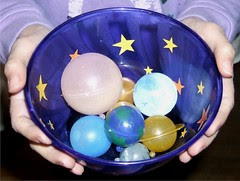 The Universe in Her Hands 1
Originally uploaded by Teckelcar
Or conversely, the Universe is My Muse.

This week's theme, Muse, really had me stumped. I don't have any particular muse. I briefly considered the dogs, thus upping their picture count to be three out of the five assignments so far. However I decided it was a poor joke and that I needed to come up with something else.

Then I had it. I could find a little itty bitty globe and photograph it being cupped in a pair of hands. I could say that the world is my muse and that would be roughly accurate.

So off to the dollar store in search of a globe, be it a pencil sharpener, a key chain, or what have you.

I sort of found what I was looking for right off the bat. Just to be sure that it was what I wanted I checked out the rest of the toy aisle. I was keeping my eyes open for alternatives when I struck gold.

It was a tube containing eight glow in the dark planets. Mercury, Venus, Earth, Mars, Jupiter, Saturn, Uranus, and Neptune were all there. Only poor little dwarf planet (or whatever it's categorized now) was left out.

I snatched those up along with some star stickers.

Back home I decorated the inside of a blue bowl with the stickers and poured the plants inside. Rebecca was my lovely and very patient hand model. I think the whole thing turned out rather nice.
Posted by Sarah at 11:02 PM