Artist of the Week: Kinkajou 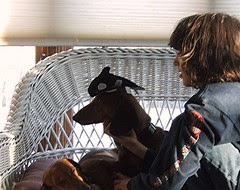 Nate and the boys
Originally uploaded by Teckelcar
This week's artist is Nate.

Nate can often be found on the dog couch and yes it really is the dogs' couch. It is the one piece of furniture they are allowed up on and for the most part the dogs honor that. As for Nate, well he really is just a big puppy. He loves to pile up on the couch with the dogs.

You'll find him there in the morning, after school and just before bedtime. hugging the red boys and sometimes doing absurd things like balancing stuffed animals on the dogs' heads. Of course he spends a fair amount of his time running around, but his down time is often with the dogs. 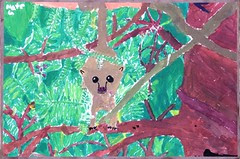 kinkajou
Originally uploaded by Teckelcar
So it's pretty easy to say that Nate is an animal lover and his affection extends to all sorts of creatures.

During his first quarter of the school year he was taking art. One of the assignments was to create a painting of the rain forest and do a short report. Nate selected the kinkajou as his subject.

My picture really does not do the work justice. The style is very evocative of Henri Rousseau (which is intentional, or at least that's what I remember him telling me). He made a nice use of color and I like the little dabs of purple signifying flowers that the kinkajou is dining upon. Nate had a great deal of fun in art and it's a pity that he will not be able to fit it in again this year.
Posted by Sarah at 11:57 PM