Artist of the Week: Dreaming of Doughnuts 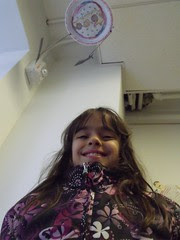 Dreaming Rebecca, a photo by Teckelcar on Flickr.
This week's artist is Rebecca from way back in December of 2011. Remember that post I did, Not Moose and Squirrel? Well the whole reason I was at this art opening was because our dear little Miss Rebecca had a piece on exhibit. We got an invitation from her student teacher with all the details of when and where.

I was going to post about this earlier, but life (and the holidays) intervened. Honestly last December was a bit of a blur to me. I thought that after Nate's Bar Mitzvah everything would calm down, but instead it was holiday madness with a desperate catch-up from all the things I had neglected. 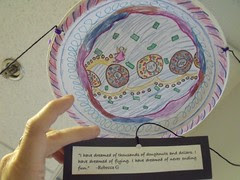 Doughnut dreams, a photo by Teckelcar on Flickr.
The art work that was exhibited  was a sort of mobile. The students illustrated a dream on a paper plate and dangling from the plate was a brief description of the dream, hence the odd angle of Rebecca's portrait. I wanted to have the piece (which was hanging from the ceiling) to be like a dream bubble above Rebecca's head.

The quote from Rebecca that describes her dream is as follows:


Which is entirely believable for Rebecca.

I love how the little figure representing herself looks like a little fairy, wings and all, in the land of giant doughnuts. A fitting dream for a child whose first words were doughnut and chocolate.