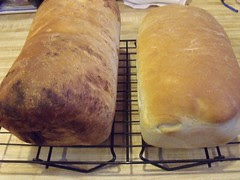 Fresh bread, a photo by Teckelcar on Flickr.
I've joined in with a cooking project that I learned about over at Diane's blog, Ginosko. Last year the group did Tuesdays with Dorie, cooking recipes from Dorie Greenspan's "Baking From My Home To Yours," this year the cookbook is "Baking with Julia Child." From what I understand two recipes will be selected per month. I love Julia Child's style of cooking and I'm always up for a bit of baking. Throw in so blog fodder and I'm game.

The inaugural recipe is White Loaves and I must say it was a wonderful dough to create, silky smooth  and not at all sticky. The recipe was pretty much dead on, my only issue was I had longer rise times, but that was due to my cool house and not the dough. In the summer I'll be able to easily find a nice warm spot for the dough to rise. My only deviation from the recipe was to make one of my loaves a cinnamon swirl. Before folding up the dough and plopping it into the pan I brushed the surface with melted butter and sprinkled on both cinnamon and sugar.

The bread smelled heavenly while baking and it was very hard to keep the kids away while it cooled. The plain white loaf, on the right in the picture, was soon gone. I got only one slice and it was delicious. The second loaf I squirreled away for tomorrow. I figure it'll be a nice treat when it's toasted with a bit of butter. I'm looking forward to my next assignment!

They both look divine. It never occurred to me to make a second loaf something like cinnamon swirl...I'd highly suggest cutting it and having your own toast before the kids are up, as this loaf may disappear faster than the other!

Hi! I saw your comment on the bake-a-long. I puchased cinnamon chips from King Arthur.com. I think mine were a wheat based product. Mary
Groovyspinning.blogspot.com or
marycanbake.wordpress.com (no posts on this one yet)

If you only were able to get one slice from the first loaf, then it sounds like you had a hit on your hands. All these cinnamon swirl loaves are giving me a craving...