Artist of the Week: Driving 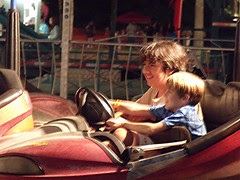 bumper car boys, a photo by Teckelcar on Flickr.
This week's artist is my not so little Jacob.

For a while his feet have been bigger than mine and that was not problem for me. Just this year he has gotten taller than me and that, well... was a bit disconcerting. The biggest milestone in his growing up, however, happened at the end of spring break.

My baby boy got his learners permit.

He breezed through the test and was issued a paper permit. A few days later his official learners permit arrived in the mail. In seven months he needs to get 45 hours of driving under his belt with a good chunk after sunset.

Then we'll have three drivers in the house.

I can't believe it's happening already. He's gone from playing with cars, to bumper cars, and now the real thing. He can't be that old.
Posted by Sarah at 11:49 PM