Project MCP: Get Down Low and Shoot Above 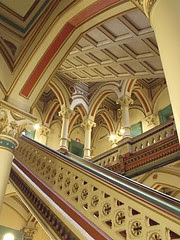 Richmond's Old City Hall, a photo by Teckelcar on Flickr.
The fourth and final challenge for April was "Get Down Low and Shoot Above." Which for me, meant a trip up to Richmond.

I had all sorts of ideas, my only limitation was the weather and that turned out to be a big problem this week. Wednesday was the first decent day and it was only in the afternoon, far too late for me to drive up to Richmond. Thursday was a complete wash, but today was just right with abundant sunshine and not a raincloud in sight.

My plan was to drop off a couple of bikes at Bunnyhop (best bike shop ever) and take pictures around Richmond whilst the bikes are being fixed. I would first try to take a few pictures of a parking deck (far more interesting than it sounds), duck into my favorite building in Richmond, and then down to the canals.

The parking deck was a bit tricky, I essentially sneacked in with the idea of shooting a few quick pictures at the bottom of the well formed by the exit spiral. Unfortunately my path took me right past the guard room and I knew I had to talk to security before crossing two lanes of traffic and hopping over a guard rail. They hemmed and hawed for a good five minutes over my decidedly odd request. I stood there smiling away until they relented. As I got into position two pigeons flew up and out, sadly they were gone before I could get my camera out.

I was much happier with the old city hall. The sunlight was streaming down from the skylights and I was able to get quite a few good shots. The one featured here is my favorite. I was positioned at the base of the staircase, aiming the camera up and across. It is such an interesting shot with strong diagonals and a lovely diffuse light. I knew I had a keeper when I pushed the shutter release. I good thing too since I never did get down to the canals.
Posted by Sarah at 9:34 PM