Artist of the Week: James Town 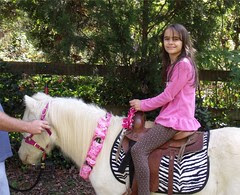 pony ride, a photo by Teckelcar on Flickr.
This week's artist is Rebecca.

The picture is from way back in November when we were at a birthday party for a one year old. The birthday girl's Grandpa decided that his first grandchild would have a very memorable party. He arranged for a petting zoo and pony to ride. The toddler set wasn't overly interested in the pony, but Rebecca was more than happy to do the riding for them.

So it's an old photo, but that is appropriate since the art work is also from last year. 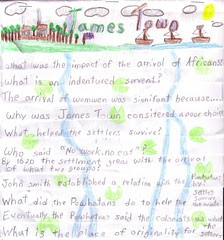 Rebecca 1, a photo by Teckelcar on Flickr.
Just before winter break Rebecca brought home a booklet she made in school on colonial James Town. I promptly scanned it, but then stopped. I was on the fence on whether or not to post it on Flickr. On one hand it was wonderful pictures illustrating the various facts about James Town, on the other hand the spelling is rather rough.

Obviously I decided that the illustrations win out over the spelling. You can check out the whole series if you click on the cover picture featured here. The set is called James Town, the fourth one in the series is particularly hilarious.