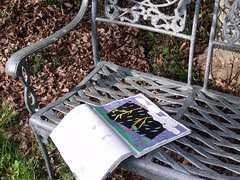 Stormy Journal, a photo by Teckelcar on Flickr.
The first challenge for the month was "showers / wet" which you figure for April would be a piece of cake.

We have gotten some rain this week, but it's either at night or of such an inconsequential amount I couldn't photograph it. I even tried sprinkling water on my pansies and discovered to my chagrin that water droplets do not stick to the velvety petals. So I had to think of another way to do showers / wet.

Then I found Nate's art journal and thought to myself I was being too concrete. I'll just photograph the collage instead. It's not the best response to the challenge, but it'll do for now.

Oh and it's Passover! So Chag Sameach y'all.