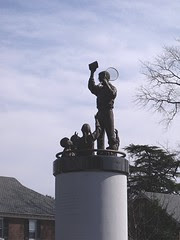 Arthur Ashe front, a photo by Teckelcar on Flickr.
Richmond, like a lot of cities, has quite a bit of statuary. In fact one of the main roads is called Monument Avenue and is divided by a wide swath of green that is home to numerous statues. For the most part the statues are of various Confederate notables with one very prominent exception in the form of the Richmond native Arthur Ashe.

The Arthur Ashe statue is my favorite piece of absurdist Richmond.

Don't get me wrong, I think Arthur Ashe was a wonderful human being and is totally worthy of a statue in his native city. But...

Did anyone truly LOOK at the statue while it was being made? 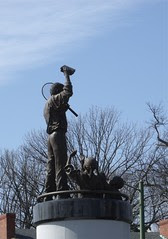 Arthur Ashe side, a photo by Teckelcar on Flickr.
I know they idea is that the piece celebrates his achievements in tennis and his dedication towards education, hence the racket and the book. With the children clustered at his feet it looks like he is about to bludgeon them with both the book and the racket. The upraised arms of the  children seemed to be a combination of beseeching him to stop and to ward off his blows. These are truly unfortunate choices of poses for all of the figures.

Seriously, if you ask any Richmonder where the statue is of the guy threatening children with a book and a racket is they'll direct you to this one.

I spent a good bit of time shooting pictures from all sorts of angles and none of them made the statue look good. Why on earth did the artist choose to depict Mr. Ashe with both arms raised in such a threatening manner. 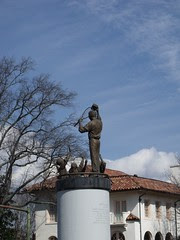 Arthur Ashe rear, a photo by Teckelcar on Flickr.
Heck I could have designed a better composition.

In my version none of the figures would have raised arms. I would have the tennis racket tucked between Mr. Ashe's arm and his body while he held the book open with both hands. Certainly it wouldn't be as dynamic, but it would do a better job of celebrating the man and would be a much more peaceful.

Then again it also would no longer be my favorite statue in Richmond.
Posted by Sarah at 11:39 PM