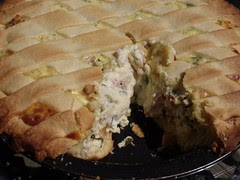 Pizza Rustica, a photo by Teckelcar on Flickr.
Today's recipe for Baking with Julia was Pizza Rustica. You can get a full run down on how to make it over at Capital Region Dining Blog and The Place They call Home. And of course you should check out Tuesdays with Dorie for the whole story.

I was a little apprehensive over the whole baking thing this month, however it all fell in place. The two Tuesdays selected very nicely bracket Passover. I know I could bake ahead if there had been a conflict, but it would have seem wrong to be promoting some sort of chametz  during Passover. 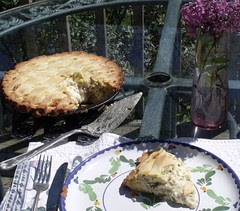 Pizza Rustica 2, a photo by Teckelcar on Flickr.
Pizza Rustica is considered traditional Easter fare in Italy. It did seem similar to some of what I remember Mama Leonardi would make for Easter. She was an amazing cook and we used to go to her house all the time and were considered part of the family. I need to big up some of the family photos we had been included in. With my dark hair I blended in, but my brother with his blond hair stuck out like a beacon.

Anyhoodle, back to the backed good of the day.

The dish itself is not all what Americans would consider to be pizza, it is much more similar to a sort of dense quiche. The crust is made with sugar to provide a sweet counterpoint to the savory and salty filling. I was not a fan of the sweetness, I would probaly halve the sugar next time I make it. The filling on the other hand was great. I really enjoyed the pie. The only change I might do to the filling is throw in some onions.

I think I will make it again . It was very delicious and I ate far too much of it for lunch. By breakfast, however, I had learned my lesson!

LOL, yes, it is good, but it is also cheese, with all the attendant issues too much of it can bring.

Yours browned so much more nicely than mine. I do think you are right about the onions - it needed something else.

Yes, this was tasty,

Very lovely job. Glad you learned your lesson by breakfast :-)