Artist of the Week: The Crazy Chicken 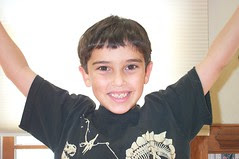 Nate!
Originally uploaded by Teckelcar.
Last year in kindergarten each student had a journal. They were encouraged to write and do things in it during the school year. One of the things Nate did ws write a story called “The Cras Cicin.” (for the non-phonetic spellers “The Crazy Chicken”.)

Here is a transcription of the above story with parenthetical additions by me:

Me and my Dad made a flying machine (red arrow).
We dived under water (dad hit an eject button and they fell in the water).

Crazy chicken (blue arrow) to the rescue! Oh great no!

This is Max and Rebecca’s favorite story. They love having Nate read it to them. To them it is the funniest story ever written. They erupt into laughter whenever Nate says “Crazy chicken to the rescue!”

Nate and Jake are currently working on the further adventures of the crazy chicken.
Posted by Sarah at 12:59 PM