While we stayed at my in-law’s house Grandma would take the kids down to a pond and feed the ducks. During one such expedition Larry and I tagged along and took the few pictures. Jake brought his binder to do a little sketching. 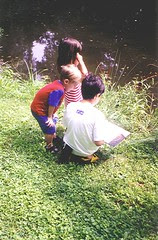 I like how Max is intently watching Jake do his drawings. But the main event was feeding the ducks; or rather I should say duck. Only one was hanging about when we showed up. He knew the score and quickly swam over to get his treat.

feedtheduck
Originally uploaded by Teckelcar.
All I can say is that he was one happy duck. He scored a ton of bread and he only had to share it with the pond’s thriving catfish population. I did spy what may have been a lone goldfish, but it was hard to see in the pond’s murk. When we ran out of bread we headed on back. Our next event would be to visit Larry’s sister in the neighboring town.

The kids love seeing Aunt Abby. She is an elementary school teacher and really has a way with her niece and nephews. While we were visiting Nate noticed she had two guitars. He has told us how he wants to learn how to play the guitar and I knew at some point he would ask to play one. I didn’t have long to wait. Abby paused, thought for a bit and then said he could. She sat down with him and showed him a few chords and how to strum. He took to it like a duck to water and after a bit she let him sit on his own. 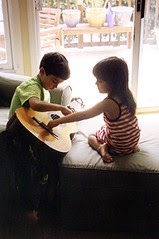 Here Rebecca joins him on his seat. I love how this picture came out. It is one of the nicest photos we have of Nate and Rebecca together.

When we were all done with our visit we headed back to the Grands for dinner. I made a nice pasta sauce with the large bag of tomatoes we dragged up North with us. I had picked up my garden share the day before we left and I wasn’t going to leave them at home to rot.

The next day, Monday, was another busy one. We had a change of plans and we would not be stopping at my cousin’s house on the beach. Their daughter was home recovering from an extended illness and loud noises overwhelmed her. Obviously it would be prudent not to bring my rather noisy brood over for a visit. Instead, we would stay an extra day at my in-law’s and head up to my Mom’s one day earlier. Oh the horror! We would be forcing grandparents to spend extra time with their grandchildren. The only sticky bit was that we promised some beachtime to the kids. But we had an easy solution, we could go to Sherwood Island.

We went in the morning with the idea of spending a couple of hours there. Nate and Jake could spend a much longer time at the beach, but two hours is the limit for a three year old. 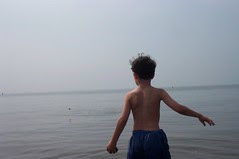 It was slightly overcast and the beach was not as nice as we remembered, but the kids had a great time chucking rocks into the water and generally messing about. 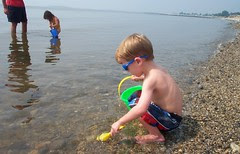 I enjoyed standing in the shallows watching the minnows dart about my feet, but we only lasted about an hour and half on the beach. It was blazing hot out and there were a fair number of jellyfish being washed ashore. We retreated to the picnic area in the shade. Up there we found an area beneath the trees where the boys could kick a soccer ball around (it was too hot for Miss Rebecca to do anything as strenuous as that.) Then we headed back to Grandma and Grandpa's for lunch.

After lunch Grandma and I took Jake, Max and Rebecca to the Aquarium. Grandma took this cute picture of us. For once you get to see me in the picture!

aquarium
Originally uploaded by Teckelcar.
We arrived at about 3:30 pm, just in time for the seal’s feeding time. Sadly the pictures didn’t come out, but we had fun watching the seals eat their dinner and goof about. It turned out that we came at the perfect time of day. At the touch tank we chatted with the volunteer and found out that the place clears out after the last seal feeding time. As a result it was not crowded at the touch tank and the kids got to really see and touch the animals

Here is a fun series with Max, Rebecca and Jake meeting a horseshoe crab.

It wasn’t until the very end that Rebecca decided that maybe the horseshoe crab wasn’t such a good thing after all.

The rest of our time there was spent veering off to each exhibit in the rather erratic fashion favored by the under four set. Jake was very helpful and would boost his siblings when they couldn’t quite see the exhibit. We were all impressed by the white alligator, but I think the two favorite exhibits were the jelly fish tank (Just like we saw at the beach! But still alive!) and the sea turtles.

That's it for now, the rest will have to wait for later. I'm a busy soccer Mom this week with two boys attending different soccer camps at separate locations.