I was going through some old photos when I ran across this gem. 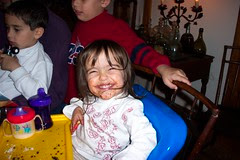 It was taken Christmas 2003 at my Mother’s house. Rebecca has always had the most incredible smile. The coating of chocolate on her face just adds to the cuteness. Just last Thursday my mechanic was quite smitten by her. I had just dumped the van at his shop and I was scrounging up a ride home (thanks Meryl!) when he came up to me and commented on how cute she is. And guess what, she had little drips of chocolate ice cream on her face and clothes. I chatted a bit with him and found out that he has a twin sister and that his mother has a twin too. What a small world!

In an odd way I found comfort with our exchange. On some level we had bonded and hopefully it would help me in getting my car fixed in a reasonable time frame at a reasonable cost. The fuel line was leaking and really wanted it fixed ASAP.

I don’t know if my daughter helped, but the repair was done early the next morning for less than $30. Turns out the fuel filter had been knocked loose. All they had to do was tighten it up. Double score! I got my car back and I have an honest mechanic!

A good ending to what could have been a major bummer.