Things We Learned This Weekend

This weekend we finally started building our shed. The parts of which had been languishing in our crawl space for about a year. The two youngest of our children are now old enough that we can work on a project without worrying about them wandering off and/or getting into mischief. We have wanted a shed for quite sometime. When it is finished we will be able to move the mowers, grass trimmers, gardening tools and various other implements of destruction out of the garage and into the shed. But first we have to build it. Larry and I like building things together. I act as the brains and he supplies the brawn. We had built a picket fence from scratch at our first house, so we were up for building a shed from a kit.

First we selected a relatively level spot in our woods, marked out an 8’ x 12’ area, raked it and some spread gravel. We got the gravel at Lowes and brought it home in our van and this is what we learned:

Our van can carry 23 bags of gravel.
However, 23 bags of gravel really affect the handling of the van. It has a tendency to fishtail with such a heavy load and the van rides about 4 inches lower than normal.

With 17 bags of gravel the handling problems disappear and the van is only 3 inches lower than normal.

Our Lowes may be open until 8:00pm on Sunday, but the garden center is locked up by 7:30 pm, fortunately we already had our forty bags that had Larry purchased(this we found out after we had built the platform and I decided we needed more gravel).

Then we dragged out the bits and pieces for the wood floor from under the house. Except for a small amount of powdery white mold on the plywood, it was all in good shape. I wiped down the plywood with straight vinegar and propped the boards up to dry and hopefully get a little sunlight.

I laid out the lumber for the frame and marked the boards where Larry would nail in the joists. It was hard work laced with (unwanted) advice from one child. Rebecca (!) was surprisingly helpful. On her own she decided her job was to quietly hand Larry a nail whenever he was done hammering. We were able to finish putting together the frames (you build it in two sections and then hammer it together at the site) before we called it quits. Jake and Nate then helped me carry the frames to their final destination.

This is what we have accomplished so far. 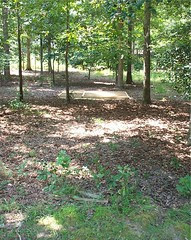 I’ll be futzing around with it this week to get it all level and attach the floor panels.