Artists of the Week: Blocks!

This week we have joint Artists of the Week, Jake and Nate.

This was a very elaborate structure that was made when we were in Vermont for my brother’s wedding last October. 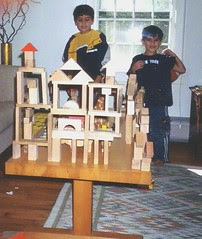 blocks1
Originally uploaded by Teckelcar.
We were not staying at my mom’s house; she already had the bride, the maid of honor, the Mother of the bride, and my brother. It was a rather full house. The last thing she needed was my crew descending on her. Instead we stayed at Margot’s house. She is a childhood friend of my mother and after my father died she helped persuade my mom to mover up north to VT. My brother and I spent a fair amount time at her house with her three boys, the middle one being in the same grade as I. 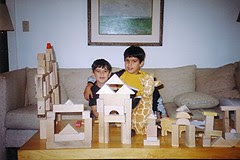 Margot was quite impressed by what Jake and Nate built and she took the above pictures.

My two oldest children have always been builders. They make buildings all the time in their room. I like how they make fully realized structures with multiple floors, windows and stairs. When you remove the roof you will see individual rooms and the inhabitants. They even provide parking lots. Larry and I refer to them as G. Brother’s Construction.