A while back in my comments we had a little thread of whom do the kids resemble. Jake looks like me, Nate looks like Larry, Rebecca looks like a blend of both families and blond Max looks like my brother. 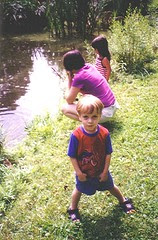 max
Originally uploaded by Teckelcar.
This is a picture of my brother at age 21 months. He was very cute, very blond and very mischievous. My mother dreaded clothes shopping with him. He would take off and hide in the racks of coats. He would even go so far as to draw his feet up so you couldn’t see him at all. But she had to bring him, for he was a very fussy dresser and he had to be there when she went shopping for him. His pants had to brown and would not wear anything with buttons. 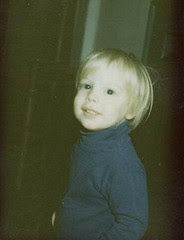 Uncle_Jonathan_1_2_71
Originally uploaded by Teckelcar.
Here my brother is a bit older. I’d hazard that he is 6 and I’m 9. People are always amazed when I tell them Max and Rebecca are twins. I guess they expect them to look a bit more alike. But as you can see here, I find it perfectly normal to have a sibling with completely different coloring. 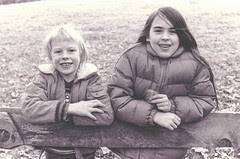 Jonathan&Sarah
Originally uploaded by Teckelcar.
In this final picture I’m with my brother at his wedding. His hair is a little thinner and he is much taller than me. I remember coming home from college for a funeral and seeing my brother for the first time after a long absence. At first I did not recognize the blond giant he had become. 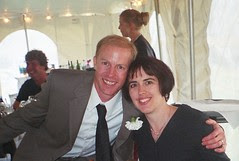 But he’ll always be my little brother, a blond imp who is always ready to go.

Fascinating blog. I loved the site you did a good
job on it, I will be back! I surf the net for blog
like this one.
Stop by and visiit my quick cash advance loan blog!