Artist of the Week: Army Base!

This week’s artist is Jake. Since Jake now believes that I should not take his picture unless it’s his idea we’ll have to settle on this group photo. 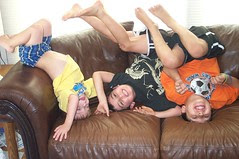 threebrothers
Originally uploaded by Teckelcar. I love this picture of my three sons and it is somewhat appropriate since Nate helped a little and Max is very much enamored of the base.

The base itself is composed of wooden blocks and is dotted about with Jake’s army men and the various military vehicles we have about the house.

armybase
Originally uploaded by Teckelcar. As always with Jake, it is a true building. There are entrances at ground level for both sections and a ladder poking up through the roof of one. The only deviation from the military theme is Filch manning the Lego lookout tower.

So far it has been up for two days and I’m not sure how much longer it will last.
Posted by Sarah at 1:13 PM