This is our digital camera. 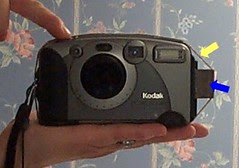 camera
Originally uploaded by Teckelcar. I would like you to note the odd protuberance on the right hand side (blue arrow). That, my friends, is my handy dandy string tensioner and pencil sharpener. Yes, we have the world’s only combination camera and pencil sharpener.

Mind it wasn’t always like this. Originally it was just a nice plain 2 MP digital camera. Then I dropped it. The battery cover broke and the camera no longer worked.

Being who I am, I decided to see if I could fix it. The camera was already 3 years old so I did not bother to take it in. I figured it would have cost more to fix it than what it was worth. I found if I could press the cover close (the little tab that keeps it shut had snapped off) the camera would still work.

After carefully examining the camera I realized I could tie a string around the camera to hold the cover closed. I could easily position the string (yellow arrow) so that would not interfere with any of the buttons. The one problem was that I could not get the string to be tight enough to hold the cover in place. I used a number of objects to tighten the string (a small rock, a pencil, etc.) when I hit upon the pencil sharpener. It looks a bit like this one, it is rectangular box shape with a ridge on the long sides that nicely holds the string in place.

This arrangement has worked well for the past two plus years. Sadly I got the camera wet, as in sat in a puddle wet, this past weekend. I dried off the batteries and recharged them and tried the camera.

It works, sort of. You have to press the camera body in just the right place after you turn it on. But it does work!

I guess I should start thinking about getting a new camera.
Posted by Sarah at 10:50 AM