Artist of the Week: Dachshund!

It’s finally my turn to be the artist of the week.

Last February I volunteered to create my local Dachshunds club entry in the National Specialty’s Dapper Dachshund Sweepstakes. Each dachshund club in the US was mailed a plain white “autograph hound” that is just like this one sans the ribbon and pen.

We passed the toy around at the meeting and did a bit of brainstorming on what sort of theme we should use. One club member, Kathy, had the clever idea of it becoming a firedog since are meetings are usually at a local fire station.

After one trip to Walmart and a lot of trolling on the internet for suitably sized fireman outfits (Build-a-Bear Workshops was a goldmine) and miniature state flags I was able to make this: 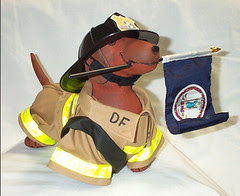 Project25
Originally uploaded by dfcv.dapper. (If you click through there is a boatload of pictures.)

I had a lot of fun creating Sparky (His official name is DFCV’s Firehouse Sparks). I spent a fair amount of time painting his body and building up the layers to the right shade of reddish brown with a light overlay of black in all the right places. It was very helpful to have the red dogs in the house! 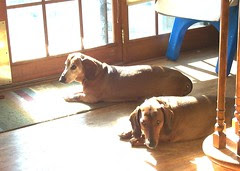 reddogs2
Originally uploaded by Teckelcar. The costume’s jacket only required a little taking in and the pants needed to be shortened just a smidge. For the finishing touch I replaced the store’s badge on the hat with the club’s logo. Jake helped me select just the right shade of yellow for the background.

The club members were very pleased with the final results.

There are 37 entries and I think Sparky has a decent chance. I’ll let y’all know when I get back from Georgia. I’m heading down today and I’ll be returning on Sunday, so it will be quiet here until then unless I’m able to finagle internet access.
Posted by Sarah at 2:15 AM