We have done a fair amount of traveling with our dogs. One summer Larry and I drove to Montana from Wisconsin, camping along the way. 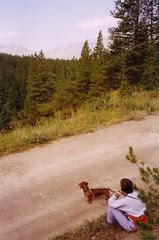 Lewis&Clark
Originally uploaded by Teckelcar. Here is Crunch looking out towards the mountains while we were at the Lewis and Clark National Forest.

Then there were the endless trips back East when we were living in Wisconsin. Combine that with going to dog shows, Crunch has peed on a lot of states. 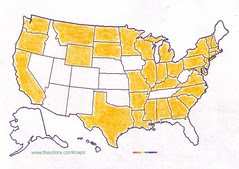 This is a map with all of the states Crunch has peed on colored in yellow. A visit to a state is not complete without the customary watering of the trees. That is why some of the states remain blank.

The funniest was California. We were flying from DC to Portland, Oregon for the National in 2001. I was very pregnant with twins, but I was determined to go. Crunch was receiving his VC plaque and we had friends to visit in Portland. Crunch flew in the cabin with us (Larry, myself, Jake and Nate). This was Crunch’s first plane trip and he was a real trooper. On half of the flights the flight crew never even noticed him.

Originally our flight was from DC to Dallas and then Dallas to Portland. Unfortunately a massive storm front delayed our flight and we missed our connection. So we spent the night in Dallas. After much wrangling with the airline we were able to get a flight to Los Angeles and then another to Portland (the alternative without the LA connection would have gotten us in much later). When we touched down in LA I had to hustle Crunch across the airport to the doggy rest area. There he took a massive piss on LA. Go boy! The rest of the flight continued without incident.

It is highly unlikely that he’ll ever visit Alaska and Hawaii, but he could visit a few of the remaining lower 48. This past weekend resulted in a big yellow letter day when Crunch added Alabama to his map.

I don’t think John will ever be as well traveled as his father. The addition of kids has definitely slowed us down, but there is always hope.
Posted by Sarah at 1:01 PM