Artist of the Week: Rainbows

Yesterday I was griping to Meryl how it was too hot and I had a bunch of over amped children running amuck through the house. She helpfully suggested that I throw them all outside. I replied that it was too hot. They last about 5 minutes and come back in all crabby and overheated. Then Meryl suggested the sprinklers.

Once I was off the phone I announced it was sprinkler time. Then there was a mad dash for bathing suits and bug spray while I turned on the sprinklers.

They had a great time. 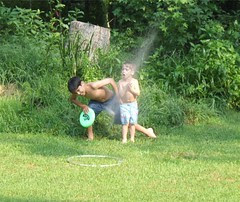 sprinklerJaKe&Max
Originally uploaded by Teckelcar. Well at least the boys did. Rebecca only lasted about 10 minutes.

Anyway, Nate noticed that the spray from the sprinklers was making rainbows. 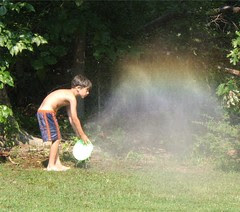 rainbow
Originally uploaded by Teckelcar. He spent a good 15 minutes playing with the sprinkler’s stream to make even bigger rainbows. So Nate gets tapped as the Artist of the Week for his efforts in water refraction.

Update:
Sorry about the original lack of pictures. Blogger and Flickr were not on speaking terms earlier and I had somewhere to go.
Posted by Sarah at 1:14 PM