Our big event today was to head on over to Krispy Kreme and have some doughnuts fresh off the conveyer belt.

The hot light was still on when we arrived and we spent a good hour eating doughnuts, drinking milk and watching the donuts go by. 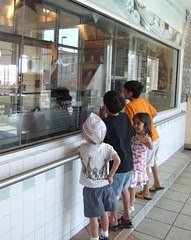 krisykreme
Originally uploaded by Teckelcar. The high point of our visit was when one of the doughnuts got stuck in the conveyer belt.


It got trapped between two levels and was ultimately sheared in half by the pressure of the oncoming doughnuts. I wasn’t able to capture what happened next. The bottom half dropped into the tub of glaze below and the top half continued on with the rest of the doughnuts. The funniest part was that chunks of the fallen doughnut were sucked up by the glaze pump and we got to watch them rain down in the glaze “waterfall.”

Meryl says I need to get out more with other adults.
Posted by Sarah at 3:19 PM