Today we did a little mulching of the front planting bed. The boys were having a very good time loading up Nate’s wagon with mulch. 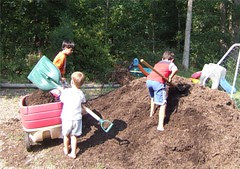 mulch
Originally uploaded by Teckelcar. Rebecca was a little less enthusiastic and spent the first 15 minutes claiming she was tired and needed to lie down. But after I had a brief discussion with her about money and how if she doesn’t work she doesn’t earn anything, she came around.

We worked for little over an hour, which seems to be the limit for my work crew. They really did try their best and we had only one argument. It was over who got to use the pitchfork. I decided that they would take turns. After each wagon load they would switch off on the tools.

While the wagon was being loaded I pulled weeds from the driveway. Rebecca joined me and found her job. She would collect the pulled weeds in her bucket and dump them in a predetermined location. Max and Jake would pull weeds and load mulch, while Nate concentrated on the mulch. Everybody would join in when the mulch was spread.

It is a slow process with all my helpers, but they are learning about earning wages. Max already has his eye on a toy tank and is almost halfway there.
Posted by Sarah at 7:18 PM