My brother, when he was a child, used to sleepwalk. It was an uncanny thing. He would walk about with his eyes wide open, carry on conversations, go back to bed and in the morning be completely oblivious to his evening adventures. He, fortunately, never went outside, but would navigate staircases with ease.

Generally it wasn’t a problem unless we were visiting a particular relative’s house. My Aunt was very safety conscious and had an elaborate alarm system that had monitors on all the doors, windows and hallways. It was a huge pile of a house in an isolated location. When we stayed over she had to disable the internal alarm system or my brother would set it off during his night time wanderings. Mind you he didn’t wander every night, but it was a consideration when we stayed over.

Last night Jake paid us a little visit in the middle of the night.

We heard an anguished cry and then Jake shortly appeared in our room. Larry got up to console Jake and asked him what was wrong.

“Dad I couldn’t find you, I thought you should be by the shield generators.”

“I thought you were by the shield generators.”

At that point I broke in. “Larry, he’s asleep. Jake is sleepwalking.”

As I led Jake back to bed I explained to Larry that my brother was a sleepwalker. Jake may look and act awake, but the Star Wars influenced statement was clearly from someone asleep.

When I tucked Jake in bed he quickly snuggled in and a small smile briefly played across his features before he settled into a more restful state of sleep. That confirmed he was sleepwalking. Whenever Jake is upset enough to cry out, it takes a very long time to calm down.

This morning he had no memory of his night time visit. 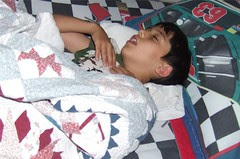 sleepingJake
Originally uploaded by Teckelcar.
Posted by Sarah at 11:19 PM