Artist of the Week: Reflections, Updated 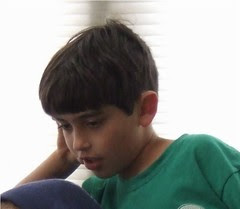 Nate
Originally uploaded by Teckelcar.
This week's artist is Nate and this is an update of two previous posts about his Reflections entry. I first posted about it here on January 31st after we found out he won first in his school and in the county and again here after he won the district and brought home all sorts of swag from the school's reception.

Since then we have been waiting on the results from the competition on the state level.

A week or so ago I took a peek at the state of Virginia's PTA web site. After a bit of hunting about I found that the winners had been posted. Nate hadn't made the cut, but it had been an amazing ride. 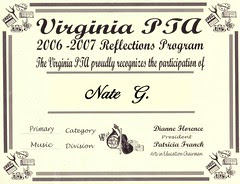 certificate
Originally uploaded by Teckelcar.
Yesterday he brought home a certificate from the state level. Ironically it was his piano teacher that got to see it first. Tuesday is when Nate has his piano lesson and just as they were about to begin Nate remembered something went over to his backpack and pulled out a folder that had been sent home with him.

I had been told that we shouldn't expect anything from the state level if we didn't place, so this was a very pleasent surprise.

I think I need to get all his prizes framed.
Posted by Sarah at 11:59 PM