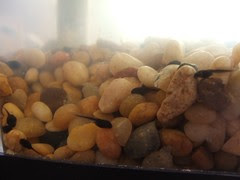 tadpoles
Originally uploaded by Teckelcar.
Saturday I came home late with Max from his t-ball game. As I rushed about throwing together dinner I found out that we have been invaded.

Sitting on the table was a little plastic vial; tightly capped, full of water and about a half dozen tadpoles.

It wasn’t a complete shock, Jake asked me if he could catch some the other day and I put him off with the standard “I need to talk to your father” speech.

I am not opposed to the idea, it is fascinating to watch the little guys develop legs, but I first needed to get organized. I would have to dig out our old 1 1/5 gallon fish tank, treat some water and let the tank settle for a day or two. Also I have no idea what to feed them once we installed them in their new temporary home.

So of course I got mad. I wasn’t ready for them and I hate having animals foisted upon me, especially when there in inadequate housing. A little vial with maybe half a cup of water does not make a good home for multiple tadpoles. Poor Jake got very upset and in the end we decided that we would get a better home for them in the morning. Nate then chimed in “what about mine?” It turns out even more were stashed outside in a dump truck.

Apparently they had badgered their father who is quite ill and just wanted to go back to bed. Larry liked the idea of their playing outside and that was what he had agreed to, not the acquisition of more pets. Anyway it’s water under the bridge and I got over it.

Sunday morning I dug out the tank, filled it with stream water and unceremoniously dumped all the tadpoles in. Not an ideal situation, but an improvement none the less.

There was much delight from the younger members of the family with our new pets. So far they are hanging in there. They like to burrow into the rocks and occasionally venture out into open tea colored water. As for feeding them, there are all sorts of helpful websites out there. One suggested boiled, then frozen lettuce leaves, but I’m going to use some left over fish flakes. It’ll be interesting to see what happens.
Posted by Sarah at 3:37 PM