Because it is spring break this week, I have had all four kids home with me. Even Max and Rebecca’s preschool program shut down. So it has been a busy week.

Monday we didn’t do much, we mostly lazed around in our pajamas until lunchtime. I know I spent my day counting down the hours until we could eat bread again. 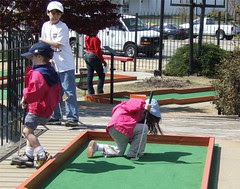 mini-golf
Originally uploaded by Teckelcar.
Tuesday was a bit more exciting. After a little tree vacuuming, Nate went to a friend’s house for a sleepover and the rest of us met up with Meryl to play a little mini-golf. A good time was had by all. The most amazing thing was that we all got a hole in one, even Max and Rebecca. At first they just wildly bashed the ball around, but as we moved along the course they both improved. At the very last hole they knocked the ball in with one shot. To celebrate our awesome achievements on the miniature links we went out for ice cream.

Wednesday was grey and damp, not at all good weather for tree vacuuming or anything else. The high point was a trip to Costco.

Thursday I had planned to take the crew to the National Zoo up in DC. But our late start in the day coupled with the very real possibility that the place would be the proverbial zoo since it was spring break, I bailed. Instead we went to our own local zoo. It too was mobbed and the whole parking lot was filled however, this did not stop me in the least. I have learned to always drive up to the front, I (almost) always end up snagging a space by the entrance and Thursday was not the exception.

Even with the crowds it was a good day at the zoo. We hit at feeding time and the animals were very active. The funniest moment was by the gibbons. Their enclosure is comprised of a climbing structure on an island in a small pond. Wild turtles abound and one good sized specimen hauled itself out of the water onto the island. A young gibbon spotted it and ambled on over to investigate this new addition to the island. The gibbon stroked the turtle’s shell and was clearly fascinated by the reptile. Meanwhile the turtle tired of the attention and turned towards the water. A larger gibbon suddenly appeared; it took one look at the turtle and then swatted it back into the pond. Unfortunately I had left my camera at home. It would have made a great short movie.

Today, Friday, has been another low key day. I haven’t planned anything. Tomorrow, if it doesn’t get rained out will be far busier. It’s opening day for Max’s t-ball league and we’ll be spending the bulk of the day at the park. I promise I’ll take pictures.
Posted by Sarah at 3:20 PM