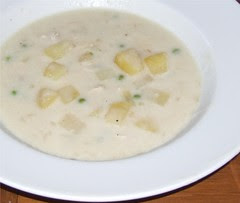 turkey chowder
Originally uploaded by Teckelcar.
On Monday when dinner time rolled around I had nothing planned. I opened the fridge and hoped I would be struck with some sort of inspiration as I peered at the contents therein. All I knew was I did not want to make chicken, again.

Half a roasted turkey breast caught my eye. It was delicious and it needed to be used up. Now I just had to figure out what to do with it. I make turkey pasta with cream sauce, but I was not in mood for it and we didn’t have any zucchini on hand. So I turned to my friend Google. The phrase “cooked turkey recipes” gave me a few ideas and I settled on creamy turkey chowder over at cdkitchen. As always things got modified to suit my tastes and what we have on hand. Parenthetical remarks are my additions to the recipe; other modifications are denoted by asterix.

In five-quart saucepan over medium-high heat, sauté celery and onions in margarine 2 to 3 minutes until vegetables are tender crisp. Add broth, potatoes, salt, pepper and cayenne pepper. Bring to a boil. Reduce heat to low.

Once mixture is at a simmer, cover and cook 8 to 10 minutes until potatoes are tender. Stir in turkey. **** (add peas) In medium bowl gradually add milk to cornstarch. Stir mixture into soup.

Increase heat to medium and cook six to eight minutes until mixture thickens.

*I don’t like celery, my husband can’t eat it and we don’t have any. So no celery.
**butter!
***I don’t have white pepper, regular black pepper worked just fine.
****At this point I added about half a cup of frozen peas. They add a nice bit of color and flavor plus hubby loves peas.

The end result was fantastic. The peas were a perfect addition. It is very easy to make and is even better the next day. Now we have turkey chowder to look forward to after thanksgiving.
Posted by Sarah at 10:13 AM