tadpoles
Originally uploaded by Teckelcar.
Another week has passed and the tadpoles are thriving. They continue to grow and develop. In fact, their little leg buds from last week have blossomed into full blown legs, complete with little flippers and toes. 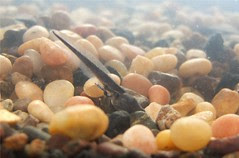 With the advent of actual legs I have been increasingly concerned about the tadpoles and their living quarters. At some point their gill flaps grow over and they begin to use their lungs, if I don’t provide a spot for them to rest out of the water the little hoppers-to-be could drown. It is not exactly clear when this momentous event occurs, so I decided it was time to do something. It would be horrible if I waited too long and ended up with a tank full of dead tadpoles.

So Friday I hauled the old 20 gallon tank out of the attic, cleaned it up and readied it for tadpoles. I let the tank settle overnight and Saturday was deemed to be “moving day.” The tadpoles moved from this: 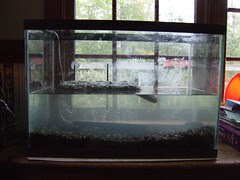 The new tank is huge, easily five times larger. I also picked up a “turtle dock” which is a floating platform that features a sloping ramp that extends down into the water. It is a perfect place for little tadpoles to rest and learn how to breathe.

I know our human houseguests would have enjoyed the show, but I didn’t want to have to supervise two extra kids. As is, it was a complicated process. Everybody wanted to scoop up tadpoles with the fish net. I decided that each child would get to scoops, starting with Max than Rebecca. It was tempting just to dump the contents of the small tank into the big tank, but I didn’t want to crush the tadpoles when the rocks went tumbling in. Instead each tadpole was carefully scooped up and then transferred to the new tank. Once they were in I rinsed the old rocks and slowly dropped them in the new tank.

The tadpoles have adjusted to their new home and are still endlessly fascinating to watch. A few have even been spotted on the boat ramp. I can’t wait to see them get their front legs.
Posted by Sarah at 11:38 PM