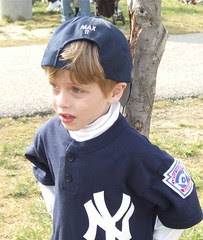 Max
Originally uploaded by Teckelcar.
Max is playing t-ball this spring and Saturday was opening day for our local Little League. It’s a big deal with all 65 teams assembled together, much speechifying and team pictures. Players are requested to arrive at 8:15 am and meet up with their teams. Then at 9:00 am they are to all march out to their assigned spots in the outfield and wait for:

The color guard from a local high school marched out (hats off).
The National anthem was sung (hats still off).
The color guard marched off (hats still off).
Many, many boring speeches by various board members (hats on, but at about halfway through some of the older kids started to whack at each other their hats).
Senator throws out the ceremonial first pitch (hats on).
Opening prayer (hats off).
More speeches (hats on).
Finally, the recitation of the Little League pledge (hats off).

Poor Max, along with his team mates, had no clue about the hats and the coaches kept taking them off and putting them on. All the while there was a cold drizzle that really made you want to wear your hat.

Next up on our agenda was the team and individual photos. We had to cool our heels for about 20 minutes until it was our turn. Meanwhile the cold drizzle changed over to a nasty cold rain. Fortunately we found shelter under a large tent that was a stones throw away from the photographers’ area. The kids goofed about in the dirt or huddled on their parents’ laps. Next door was a small tent selling snow cones and cotton candy, we all joked about what a great day it was for those particular treats.

When it was our turn for pictures we found out much to our dismay that the kids had to stand outside the tent and, of course, be without a coat. It was a challenge to get a halfway decent expression out of the kids as cold water dripped off the tents, down their backs with rain lashing them as well. The hardest photo was the team picture. The tallest third of the team were the lucky ones, they got to remain standing. The rest had to kneel or sit on the very wet grass. One boy refused and was almost in tears, he was cold, wet and did not want to kneel on the grass in the rain. As a compromise he was allowed to sort of bend down in a half squat. It was possibly the most wretched photo session I have ever been to, but the kids were mostly real troopers and were able to put on a brave face. Once it was over we were free to go. Our game wasn’t until 5:00 pm and it was questionable if there was even going to be one. All of us headed home and the coach promised to keep us posted.

An hour later the skies cleared and it was a beautiful day.

The fields dried up and the game was on.

It was a hoot watching the kids play ball. Max did a good job providing back up when he was in the outfield and stopped the ball several times. When he was in the infield it was a little harder for Max to stay focused, the loose dirt was so much more interesting, but he only missed one play. His at bats were the best part.

Max is the smallest member of his team and the coach had to smash the tee all the way down when Max stepped up to bat, otherwise the ball would be almost at his shoulders. Once everything was set he would knock off a decent hit. Then he would stand there admiring his handy work while all the parents would wildly cheer him on to run. The coach at home plate would take the bat away and push Max down the first baseline.

Max got tagged out after his first at bat, was left at first during the second, and was able to make it home the third time.