Artist of the Week: Box 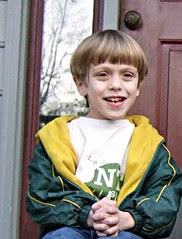 Max
Originally uploaded by Teckelcar
This week's artist is Max.

Max is a funny, quirky little guy. Certain subjects such as zombies and vampires are off limits, but he loves all of the Star Wars movies, freaky aliens and all.

He also loves to draw pictures, the figures still remain in the stick figure stage, but are elaborate with some sort of tale to tell. Max really dislikes coloring pages and unless the subject matter interests him, it is done in a slap dash fashion.

So it's always interesting to see what happens when he is directed to create something for school.

For Valentines day all the students had to create a mailbox. A shoe box wrapped in plain paper was to be used. After a huge struggle to find boxes during Jake's first year in school, I have learned to stock pile all the shoe boxes that come into the house

So it wasn't a problem for me to conjure up a few for Max to make his selection. He settled on a bright red one that I carefully wrapped in white paper, only exposing the edge of the lid. I though the bright red color contrasted nicely with the stark white paper. I even cut out a hole (with a big protest from Max) for the kids to use as a mail slot for the valentines. 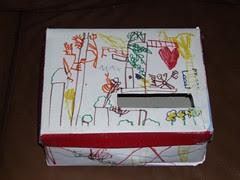 Box
Originally uploaded by Teckelcar
I then sent Max off to school with his box to decorate while in the classroom.

And this is what he did.

There are all sorts of wild animals , trees and a building. The one concession to Valentines Day is the single heart that I'm sure was added as an after thought. Jake and Nate had produced far more Valentines thematic boxes in kindergarten. But that's Max, a boy that marches to his own tune.
Posted by Sarah at 11:57 PM