Artist of the Week: Lego X-Wing

This week's artist is Max. 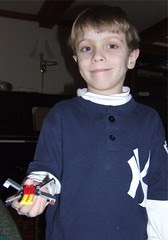 Max is a huge Star wars fan, if fact I think you would be hard pressed to find a bigger fan in his age group. He would watch Star Wars movies all day long if we would let him. A close second would be playing Star Wars Galactic Battleground (He is not allowed right now because a fair amount of reading is involved and he is not ready.)

As a result most of his creative play centers around Star Wars. Nothing makes him happier than a rousing (plastic) light saber battle in the backyard. Most of his buildings in some small way relate to George Lucas's epic. One of his favorite books at the library is the "Incredible Cross-Sections of Star Wars, Episodes IV, V & VI: The Ultimate Guide to Star Wars Vehicles and Spacecraft." He can't read yet, but he will spend hours poring over the illustrations in the book.

So of course his Lego creations reflect his passion. 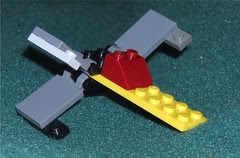 x-wing opened
Originally uploaded by Teckelcar
Max made this particular space craft at the end of last February. It is an X-Wing Fighter that was completely his own design.

In the first two pictures the ship has its s-foils or wings in the open/ attack position. In the last frame the wings are in the closed position.

I thought this simple little craft was utterly amazing. At age six he was able to figure out a way to make the wings change position. I think most kids his age wouldn't have even bothered. 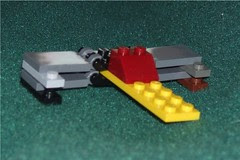 x-wing closed
Originally uploaded by Teckelcar
Even Jake and Nate were impressed by his resourceful solution.

I have a drawer full of sharp knives and not a single butter knife in the whole lot.
Posted by Sarah at 11:58 PM