I have the bestest friend ever.

I was talking to Larry on the phone Wednesday (he's out of town at a conference) when it suddenly hit me that yes the two games the kids have on Thursday don't conflict and are at the same field, but I'm going to be stuck there from 5:30 to at least 9:30 and maybe as late as 10:00. The late hour isn't too big a deal for the older two boys, Max and Rebecca, however are another story.

So I called up Meryl and asked her if she was busy Thursday night. And it just so turned out that she wasn't. 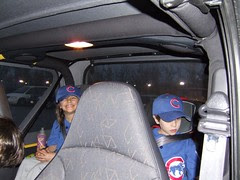 Max and Rebecca in Jeep
Originally uploaded by Teckelcar

I gave her a choice she could watch Jake's major-minor game or shuttle the rest home and stuff them into bed. Since the pollen counts are up Meryl elected to take the younger set home, which made Max and Rebecca *very* happy. Of course they completely forgot on Thursday and Max started to grouse about how he never gets to ride in Aunt Meryl's car. I stopped him cold when I said "Well you do tonight, Aunt Meryl is driving you home."

Nate also decided to head back home, he had his fill of the park and he wanted to ride in the Jeep. From what I understand he was quite a stickler about the speed limit. Meryl asked me later how I can stand driving him about. I simply pointed out that in the van he's in the back row, far. far away from the dashboard. 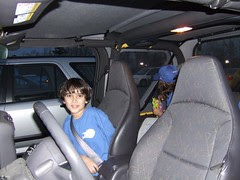 Nate in Jeep
Originally uploaded by Teckelcar
In the Jeep... well he got to ride up front and got an unobstructed view of all the dials. And yes the front is not ideal for a nine year old, but I trust Meryl and she has the ability to shut off the front passenger airbag.

Anyway, the younger crowd got home safely and I got to watch Jake's team pretty much annihilate their opponent. The game got called at 9:15, Jake's team was up by more than10 runs and the other team had no hope of coming back in one more inning.

We got home at an almost decent hour and Jake even got to visit for a bit with Meryl. It's a nice having a good friend that can pitch in when you need a little help.
Posted by Sarah at 11:59 PM