Trudy_at_Potomac_Hound_7_06_Cropped_Photo
Originally uploaded by Teckelcar
A lot of dog breeders name dogs along some sort of theme. The themes can run by the litter or the breeding line.

For example: John's litter had a Beatles theme. There were only four boys and their puppy names were: John, Paul George and Ringo. Puppy names are not always kept, but as you can tell John got to keep his. It's a nice plain, honest name and so is John.

Dell's litter is a good example of a thematic line. His Great Granddam was Candy Cane. Candy Cane produced Godiva who in turn had (Nestlé) Crunch and Hershey. Crunch in turn begot Dell (Ghirardelli), Brad (Five Star) and Trudy (Gertrude Hawk). There are a few more in the litter, but those are the ones I know.

Anyhoo I was checking out the ice cream at Food Lion the other day when a new limited edition ice cream caught my eye. Turkey Hill has something called Gertrude Hawk Box of Chocolates. I'm a huge fan of Turkey Hill, I love chocolate and it's Dell's sister Trudy! I had to buy it. I really had no choice in the matter. 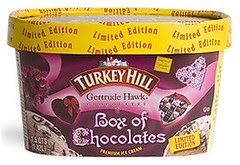 turkey hill
Originally uploaded by Teckelcar
I brought it home and eagerly scooped out a small bowl to give it a taste. Oh my, is it good. It has the scrumptious Turkey Hill chocolate ice cream as a base and chocolate miniatures from Gertrude Hawk sprinkled liberally throughout.

I love it and so does my husband. The whole thing was gone in less than three days. I told Trudy's owner about it and she is now trying to find it around her.

So now we have a new favorite ice cream, Trudy's Box of Chocolates
Posted by Sarah at 2:01 PM