Artist of the Week: Cake

party
Originally uploaded by Teckelcar
So hey, it's my turn to be artist of the week. I'm pretty proud of the cakes I made for the football banquet and I thought I'd share them (or at least the pictures).

Originally I volunteered to make a team cake, but the next day I was asked if I could make more, as in enough for the banquet. After a bit of consideration I figured what the hey, it'll be easier than the last big cake I made. At the very least it's all local driving and not the massive multi-state trek it was for my brother's wedding. 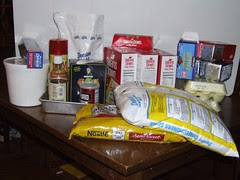 ingredients
Originally uploaded by Teckelcar
The first order of business was figuring out how much cake was needed. I consulted with the guy catering and he said it was a bit of a crap shoot. It could be 120, 150 maybe even 200. Four sheet cakes (technically they were half sheets) would fill the bill. The rule of thumb I heard said 100 servings per cake, but that's a load of crock. At most I could see 75 servings per cake and those would be pretty mingy. Since there were four teams (Flag, Minor, Junior and Senior) there should be four cakes. Since this would be a boatload of batter I requested that I not foot the bill for all the ingredients (pictured to the right). The caterer arranged for the athletic association to pay the tab and he would drop off the stuff.getting the ingredients. 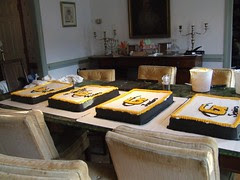 dining room
Originally uploaded by Teckelcar
The party was on December 1st and I got the stuff a couple days before Thanksgiving. This gave me plenty of time. I decided I would bake the cakes on Saturday and Sunday. Start assembling them Sunday night and finish them up on Monday when the kids were at school.

For once i was able to pretty much stick to my schedule and I had all the cakes done early Monday afternoon. Jake came home from school just as I was piping the final borders. I had a little assembly line going on the dining room table. I would do one particular aspect of the cakes and shuffle through them before moving onto the next element. I free handed the G logo on the cake and I was very pleased how all four turned out. All I had left to do was to get the cakes to their final destination. 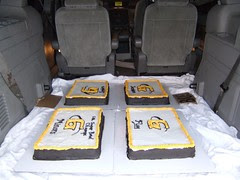 car full of cake
Originally uploaded by Teckelcar
I gave the caterer a call and I arranged to meet him at the venue at about 4:30-4:45. This would give me enough time to drop off the cakes and get back home to get the kids and return for the banquet. It had to be done in two trips because I could not realistically fit four cakes and four kids in the van at the same time. And no, having each kid balance a cake in their lap was not an option. In fact you can see here I folded down the rear seat and slid the cakes in on a clean table cloth.

The caterer was impressed with the cakes and I got a ton of compliments at the banquet. All of the cake was gone and it looked like we had well over 200 people in attendance. Not a bad weekend's worth of work.
Posted by Sarah at 11:55 PM

Labels: Artist of the week, cake, Me