Really and Truly the End of Football 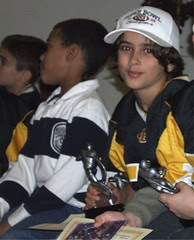 Nate
Originally uploaded by Teckelcar
For now at least.

Tonight was the big end of season football banquet. There was much speechifying (one group of coaches kept going on and on about each player, I started to get snarky with a fellow parent. We both wanted this to wrap up quickly), good bbq and of course the ubiquitous trophies.

Nate is sitting on the edge of the stage with his team. They are all such nice kids. In fact the two other boys in the picture are coming over to our house this weekend for Nate's slumber party-birthday spectacular. He had a fabulous time tonight.

It is interesting to note that Nate is starting to appreciate the relative value of trophies. The two he received this year (one for baseball and tonight's football) were well earned, both of his teams won the championship. He now sees his numerous soccer trophies as just meaningless end of the season trinkets. His two championship trophies and his piano judging trophies now have an added value.

He told me just the other day that he only likes the trophies he actually earned. I picked out a busted soccer trophy in his room and asked him if that meant I could now chuck it. He happily said yes.