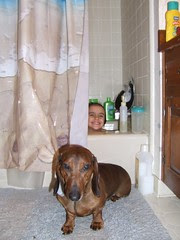 Bathtime
Originally uploaded by Teckelcar
I have lived with dogs all my life.

When I was young our dogs were very much against the whole concept of bath time. It was something akin to pig wrestling when it was time to clean them up. You would have drag them into the bathroom, manhandle the dog into the tub, shut the shower doors and stay in with the now miserable beast. As soon as there was an opening they would be gone.

The dogs Larry and I had when we were first married, Crunch and Rally, were a bit better behaved. They didn't like baths, but would stoically stand in the tub. There good behavior was the result of a liberal distribution of treats or as I liked to call it, chumming. Since Crunch was a show dog, frequent baths were a fact of life and I wanted him to be as cooperative as possible.

Now we have John and Dell.

John seems to actually want to take baths. Whenever I bathe the children he is soon in the bathroom checking things out. He happily trots through the doorway and stations himself right next to the tub. This delights the kids and sometimes they'll even request that John joins them. I'll plop him in the tub and he'll calmly stand there for as long as we want.

He looks a bit put out in the picture because he wanted to be in my lap or in the tub. Rebecca was delighted with his appearance, but she did not want him to join her.

Dell meanwhile has the far more classic reaction to bath time. He once came up, poked his nose into the bathroom and you could literally see him think "Oh no! It's bath time! I've gotta get outta here!" and he whipped back down the stairs.