Artist of the Week: Diorama 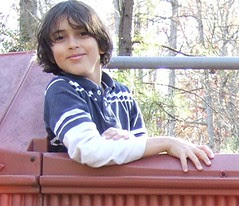 Nate
Originally uploaded by Teckelcar
This week's artist is Nate.

I got this picture of him a few weeks ago during our annual holiday card photo session. He looks so cute and so very confident in this shot. His hair has gotten quite long, but he is adamant that I not cut it. We compromise with a very slight trim to neaten it up. I tease him that he is not Samson and he'll be fine if I do cut shorter. But it is what he wants and it is a battle not worth fighting. However he is not allowed to fuss when I comb out his hair. That is the price you pay for long hair.

Anyway about a month or so ago Nate had a big book report and project to do. For the report he picked out "The Burning" by Kathryn Lasky. The book is the sixth from a fairly neat series of books called the "Guardians of Ga'Hoole." The whole series is about a society of owls and is a good read, I highly recommend it. 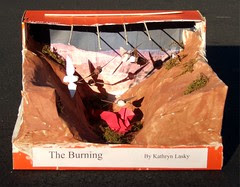 The Burning
Originally uploaded by Teckelcar
For the book report Nate had a choice of projects. He decided on making a diorama, specifically of an aerial battle near the end of the book. Originally he was going to use clay to form the canyon walls, but it kept breaking up and flaking off the cardboard supports. I suggested that he try paper mache, he had plenty of time and it would be lightweight and sturdy. The clay would be used to make the owls.

He had great fun laying out the strips and forming the canyon. It took us about four days to make the whole thing. The end result turned out very nice after Nate painted the canyon and decorated it with moss and crumpled paper "fire." (I found the red canyon back drop.)

The owls were a bit tricky. Nate had no problem making the bodies and painting them, but the wings had him stumped. The clay would not stay in place and, again, it was far too brittle once it dried. I suggested paper and the end result pleased Nate. Using fishing line and skewers we were able to suspend the owls in a great swirling battle. My main contribution there was in knot tying.

The whole thing looked great and he ended up with an A.
Posted by Sarah at 11:52 PM