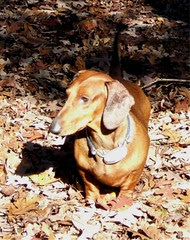 Dell
Originally uploaded by Teckelcar
As I have mentioned before Dell often brings a toy to bed with him.

Its a funny little quirk of his and we have learned to check his crate most nights. If it weren't for his destructive tendencies we would let him have his lovie, but with a fifty percent kill rate on toys, it is not going to happen anytime soon.

Just now I have pulled out a manatee from Dell's crate. It still has its eyes (those are always the first to go) so it probably was tonight's intended crate mate. Then again he might have been saving it for a good chew session. I'll never know.

And this brings us to the second photo in this post. It's just a regular bottle of glue. Nothing is particularly special about it. I've used it to glue back eyes and it was out last night for a school project.

glue
Originally uploaded by Teckelcar
Except... it is special to Dell.

Yes last night's lovie was a bottle of glue.

As you can see it emerged unscathed from Dell's crate. I'm not particularly happy he had glue in his crate. At least it only had a little left in the bottle and it is a type, as Larry observed, has been eaten by scores of children with no ill effects.

In fact this is precisely the reason why we don't have Gorilla glue in the house. To quote one web site:

"After being exposed to moisture, this product is able to expand to many times its original volume. If ingested in its liquid form (e.g., by licking up a spill, a towel, or item being glued) it can form a hard "foam-like" foreign body, generally in the stomach. An obstruction of the digestive tract can then occur. "

Yikes! I've heard it is an excellent glue, but I won't have it in my house. I have a couple of very silly dogs that'll chew anything left out and with four kids, it'll get left out. And if Dell did get the glue, it probably would not be a lovie.
Posted by Sarah at 11:38 PM